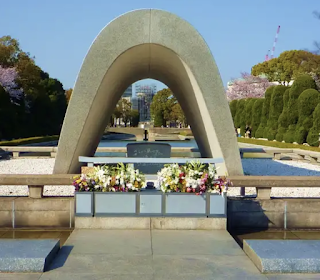 Hiroshima Friday
On August 6, 1945, at 2:45 a.m., the Enola Gay, a B-29 bomber, took off from Tinian Island in the Mariana Islands. It was flown by Lt. Col. Paul W. Tibbets—who had named the plane after his mother—and carried an atomic bomb called "Little Boy." At 8:16 a.m., the bomb was dropped over the city of Hiroshima. It exploded at an altitude of 1,900 feet, above a hospital. It released the equivalent of 12,500 tons of TNT and destroyed over four square miles of the city, leveling about 62,000 of Hiroshima's 90,000 buildings. Around 80,000 to 90,000 people were killed on impact, and another 60,000 died by the end of the year on account of radiation sickness and other injuries sustained from the blast.

Washington tribe calls on Seattle City Light to remove the Gorge Dam
To help salmon and free a culturally important stretch of the Skagit River, the Upper Skagit tribe demands that Seattle tear down the dam.

To Save A Huge, 24-Armed Sea Creature, Scientists Become Loving Foster Parents
On an island off the coast of Washington state, scientists have resorted to breeding sunflower sea stars in a lab.

Posted by Salish Sea Communications at 7:10 AM