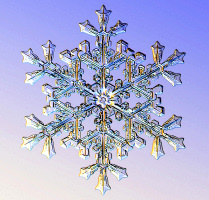 Aloha Snowflake Friday!
There are different sizes and shapes of snowflakes, and none are exactly alike, although they do fit into one of 35 different shape categories. They form when water vapor condenses into ice crystals in the clouds. They accumulate around particles of dust or dirt, which affects their shape, as do factors such as temperature, humidity, and currents. Snowflakes have different numbers of water molecules, and it is these molecules which cause them to form a crystal pattern. A six-sided crystal snowflake is most common, but flat or thin needle-shaped flakes also form. Snowflakes also have different amounts of oxygen and hydrogen, which also affects their shape. Although they are made of clear ice, they appear white because of diffuse reflection.

Northern spotted owl’s Endangered Species Act status will remain unchanged
The U.S Fish and Wildlife Service ruled against upgrading the iconic Northern spotted owl’s protection status Monday under the Endangered Species Act. The agency said the species’ continued decline warrants a reclassification from “threatened” to “endangered’' but it elected against taking that step because it considers other listed species to be higher priorities.

Researchers aim to use artificial intelligence to save endangered whales in B.C.
Researchers are aiming to "teach'' a computer to recognize the sounds of resident killer whales in order to develop a warning system for preventing ships from fatally striking endangered orcas off British Columbia's coast.

Calls to terminate Columbia River Treaty spark concern after 2 years of negotiations
A cross-border treaty that has regulated the flow of the Columbia River for over 50 years could be in jeopardy as a group of American politicians calls on the president to invoke his executive authority and terminate the treaty.

Coalition aims to expand protected area
A coalition of conservation groups, shellfish farmers, tribes and area residents is asking the state Department of Natural Resources to cancel plans for three timber sales to protect a rare rhododendron forest. The 936-acre forest on the Toandos Peninsula and along Dabob Bay is the largest in the world.

B.C. sets new 2025 emissions target after falling behind on climate goals
The British Columbia government is setting a new target for cutting greenhouse gas emissions by 2025 after determining it is further from reaching its goals than previously forecast.

NMFS Demands More Mitigation for Nearshore Projects in The Puget Sound Region
In November, the National Marine Fisheries Service (NMFS or the Service) issued a final jeopardy opinion for 39 nearshore development projects in the Puget Sound region that had been under consultation with the U.S. Army Corps of Engineers (Corps).

Posted by Salish Sea Communications at 8:00 AM No comments:

Aloha Hanukkah Friday!
Hanukkah, which is the Hebrew word for "dedication," is a Jewish celebration that lasts eight days and eight nights. It commemorates the rededication of the Second Temple in Jerusalem, where, according to Jewish belief, a miracle occurred that allowed oil to light a menorah for eight days, when there only was enough oil for one day. The holiday begins on a different day each year, as it follows the lunisolar Jewish calendar, not the Gregorian calendar. It starts on the 25th day of the Jewish month of Kislev, which usually falls between late November and late December.

Outdated sewage treatment is suffocating fish in Puget Sound
....Environmentalists have sued the state over the sewage-treatment plants’ waste dumping, pointing out that the last time the Washington Department of Ecology required major modernization of wastewater plants was in 1987 — and that was an upgrade to a technology first deployed in the early 20th century.

Whale watch operators insist their presence helps protect southern resident orcas
Commercial whale-watch operators say they accept the need for the new licensing system, to keep better track of who is in the industry and spending time near the whales. But they insist they play a "sentinel role" on the water.

Navy Growler jet noise loud enough to reach orca pods even 100 feet underwater, new research shows
In a paper published in the Journal of Marine Science and Engineering, scientists reported an underwater microphone anchored in nearly 100 feet of water offshore of the runway at Naval Air Station Whidbey Island distinctly picked up the sound of the jets, at levels known to affect orca behavior.

What the fight over EPA chief says about Democratic divisions
Mary Nichols, a national figure in environmental regulation with a string of achievements that earned her the name “queen of green,” seems a natural choice for EPA chief under a Biden administration.


$176M permanent salmon fishway announced for Big Bar landslide site on B.C.'s Fraser River
The federal government is spending $176 million to install a permanent fishway through the site of the Big Bar landslide on the Fraser River north of Lillooet, B.C.  Design and construction work is expected to begin this winter with an operational date set for the start of the early 2022 salmon runs.

Posted by Salish Sea Communications at 12:18 PM No comments:

Aloha Cheetah Friday!
The cheetah, Acinonyx jubatus, is a large cat native to Africa and central Iran. It is the fastest land animal, capable of running at 80 to 128 km/h (50 to 80 mph), and as such has several adaptations for speed, including a light build, long thin legs and a long tail.


Exxon Writes Off Record Amount From Value of Assets Amid Energy Market Downturn
After insisting for months that its oil and gas investments remain as valuable as ever, ExxonMobil plans to write down $17 to $20 billion in natural gas assets, in the largest such announcement the company has ever made.

B.C. oyster producers fighting to stay afloat financially and hold on to their farms during pandemic
While many B.C. restaurants have adapted to COVID-19 restrictions by offering home delivery, it is not likely a customer's first thought to dial up a dozen half shell oysters.

What will a Biden presidency mean for environmental protections and public lands — in Washington and beyond?
After four years of rollbacks to environmental protections and reductions to public lands introduced by the Trump administration, President-elect Joe Biden and his incoming administration will be presented with a chance to reverse course, say outdoor recreation and advocacy groups.

It’s Time to Listen
The onset of COVID-19 created devastation worldwide. But for whale researchers like Janie Wray, who has been studying the unique calls of killer, humpback, and fin whales in British Columbia for more than 20 years, the pandemic presented a unique opportunity—a chance to hear how whales respond to a quieter underwater world.

‘A lost run’: logging and climate change decimate steelhead in B.C. river
When zero fish showed up for a winter count in the Gold River on Vancouver Island, their absence hinted at a much larger story of how and why this species is disappearing throughout the province.

Nearly 3,000 European invaders found on Puget Sound shores. They’re crabs
Since April, Lummi Nation natural resources crews had trapped more than 2,600 of the unwelcome invertebrates, up from just 64 the year before, and more than anywhere in Washington state.

Ship strikes 'significant' cause of death for southern resident killer whales, UBC study finds
Necropsies of over 50 killer whales over the last decade show more of the mammals are dying as a direct result of human behaviours in the Pacific Ocean than previously thought.

Killer whale populations are dying. New study helps researchers understand why
Humans could be a major cause of death for killer whales, new research says.

Tire dust killing coho salmon returning to Puget Sound, new research shows
...In a breakthrough paper published in the Dec. 3 issue of Science, a team of researchers revealed the culprit behind the deaths of coho in an estimated 40% of the Puget Sound area — a killer so lethal it takes out 40 to 90% of returning coho to some urban streams before they spawn. It is a killer hidden in plain sight.

Posted by Salish Sea Communications at 11:13 AM No comments: