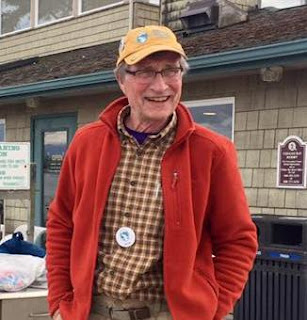 As a member of the Skagit County Marine Resources Committee (MRC), I was able to attend this conference along with members from Island, Snohomish, Whatcom, San Juan, Clallam, and Jefferson MRCs and many other attendees from environmental agencies and groups – some 160 in all.  These are held yearly and typically alternate between Port Townsend and Bellingham.

This one was special, it being 20 years since the establishment of the Initiative and so a lot of history and recognition of old timers was included along with presentations, discussions, speeches, and lots and lots of schmoozi …. er … networking.

If you search on “Northwest Straits Initiative” you can find all sorts of information about that and Marine Resources Committees as well as the agenda and speakers for the conference.  Eventually some of the televised materials may be available as well.

Here are some personal learnings and observations:

Many kudos to the planning team – it was so well organized, flowed smoothly, and the setting and facility at Fort Worden so fitting.  The weather was post card gorgeous, as were the ferry rides from Coupeville and back!

It was a fine and moving tribute to the 20 years of this effort, with special appearances by the wife of Representative Jack Metcalf, the 2nd District congressman who co-sponsored the Initiative, and by a “local-boy” representative for Senator Patty Murray, the other co-sponsor so long ago.

Coincidently, November 16, the opening day of the conference, was also the day of the presentation of the ORCA Task Force recommendations to the Governor in Olympia.  I was impressed that many members of the Task Force were at this conference, including Sheida Sahandy who is the leader of the Puget Sound Partnership.  Many of us have long felt like the whole NWStraits Commission and Marine Resources Committees are almost step-children of the great Lower Puget Sound Tong of Ecosystem Fixer-uppers and so this participation was most welcome.

The plight of the Orcas and the hopes for improvement hung like a cloud over the whole event.  Many talks and discussions were flavored by that.  I personally sensed this superficial hope and confidence and commitment underlain by this alternate sense of hopelessness, despair, and sadness.  I got no sense that anyone was going to give up or slack off or stop looking for things to improve – but everything we talked and learned about seemed like so little, so late, and so wrong for those whales.  Like - If we don’t let people go look at them anymore they will prosper.

One of the great aspects of this conference is the networking and connections.  We got much time to visit with our peers in other MRCs, share ideas and experiences with other people doing what we are doing, and make connections to broaden the scope of locally successful projects.  School-kids education, Plastics reduction and Recycling clarification, and use of the application MyCoast are some examples of that.  It also becomes so almost unimaginable – seeing all of the big and little improvements that have been made by this Initiative over 20 years.  Most impressive.

It always amuses me to listen to various people talk about organizations and frequently use wrong names.  We were called Marine Resource Councils, Marine Recovery Committees, etc.

Which leads me to a final observation – our communication of successes and needs to the “outside world” is pretty sad.  We have yet to enlist the thousands and thousands of “typical people’ in the Battle for the Sea.

We are so good at producing long lists of things we have done and fishes we have saved and shorelines we improved and science findings and so on.  But – unfortunately – the vast majority of the people who live around the Salish Sea do not relate to that and usually do not understand it.  We just can’t seem to figure out how to make messages which appeal to their values instead of ours.  We sell the steak instead of the sizzle.

And many do not particularly want to because their future is in science or research and that requires speaking and messaging in science or research.  Others belong to an organization or agency with a specific mission and that often severely constrains their outreach options.  Further, many of our leaders are of that ilk and so are not always the best examples of public persuaders.  Almost everyone whines about lack of money.  How inspiring is that to a beleaguered tax-payer?

There were some parallel sessions at the conference.  One time you could choose between “Indicators of Straits Ecosystem Health: Actions to Impacts” or “MRC Story-crafting:  Building and sharing our Personal MRC stories.”  More than 100 people went to the first one.  Fifteen chose the one about telling our stories.  I rest my case.  (Sounds like an opportunity to me – let us see what happens!)

It would be good to get other folks impressions and thoughts from the conference.  If you are not able to comment directly, maybe e-mail Mike Sato  and he can post your comments.