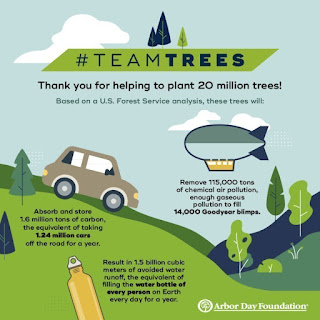 Aloha Arbor Friday!
The holiday's name comes from the Latin word arbor, which means tree. In 1594, the mayor of the Spanish village of Mondoñedo organized a tree-planting festival—the first festival of its kind. Another Spanish village, Villanueva de la Sierra, held the first Arbor Day in 1805. In America, Arbor Day got its start in 1872. Julius Sterling Morton, a journalist, and his wife, Caroline, moved to Nebraska City, Nebraska, in 1854, the year Nebraska became a territory. They bought 160 acres of land, which was mostly desolate, and planted trees and shrubs on it. Morton began writing about the value of trees in the Nebraska City News, Nebraska's first newspaper, where he was the editor. In 1872, Morton proposed to the Nebraska Board of Agriculture the idea for a day for everyone in Nebraska to plant trees. Arbor Day became an official state holiday in Nebraska in 1885. It was designated to take place on April 22, on Morton's birthday. But it wasn't until 1970 when Arbor Day became National Arbor Day. Although the holiday had always been held towards the end of April, it was also at this time that the day began being celebrated nationally on the last Friday of the month.


What coronavirus tells us about climate change on Earth Day's 50th anniversary
The Seattle Times headline on Seattle’s first Earth Day, on April 22, 1970, was prescient. So much so, it could have been written on this year’s 50th anniversary of Earth Day.


US Supreme Court Rules Against Maui In Major Clean Water Case
The U.S. Supreme Court ruled Thursday that Maui County can’t skirt the Clean Water Act by merely pumping its sewage into groundwater before discharging it into the ocean.

On Earth Day, activists call for environmental justice in the face of the coronavirus pandemic
Washington’s broadest coalition of climate activists is using the 50th anniversary of Earth Day to call for a just recovery from COVID-19.

Ten Years after Deepwater Horizon, Worries Remain
Efforts to clean up the lingering effects of the oil spill are well underway, but secrecy and deregulation have returned to the Gulf, raising the specter of a repeat. Boyce Upholt reports.

EPA Finalizes Rollback of Water Pollution Safeguards
Pulling the plug on the eve of Earth Day, the Environmental Protection Agency eliminated critical pollution rules from the Obama era that had safeguarded at-risk ecosystems and drinking water across the country.


E.P.A. Weakens Controls on Mercury
The Trump administration on Thursday  weakened regulations on the release of mercury and other toxic metals from oil and coal-fired power plants.


The great data freeze: How the pandemic will set back environmental science
With the majority of environment-focused scientists, natural resource managers and field technicians who study and maintain the natural world working remotely to flatten the curve, the flow of crucial data yielded by fieldwork has essentially been frozen. 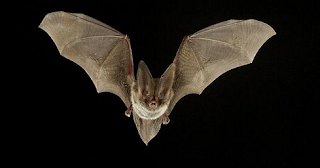 Aloha Bat Friday!
There are at least 900 species of bats, and some experts say there are close to 1,200. This means that bats make up between a fifth and a quarter of the world's mammal population. Many bats hibernate during the winter, meaning that April 17 is a fitting time for Bat Appreciation Day, as many are waking up around this time of year. Others that live in the Northern Hemisphere migrate south for the winter. In general, bats like to live in warmer areas near the equator. Some bats can eat 1,200 mosquitoes in an hour, and can consume their body weight in insects in a night! Bats have also historically been important because of their droppings, called guano. Guano is an excellent fertilizer, and once was a very important commodity.


50 years ago, the global Earth Day movement was born — and so was WWU’s Huxley College, both shaping national environmental conversation
On April 22, 1970, environmentalists marching on the first Earth Day shook the nation out of what had become a long, pollution-riddled slumber — the ugly byproduct of the Industrial Age.

E.P.A. Weakens Controls on Mercury
The Trump administration on Thursday  weakened regulations on the release of mercury and other toxic metals from oil and coal-fired power plants, another step toward rolling back health protections in the middle of a pandemic.

EPA charts path to suspend hazardous waste cleanup amid coronavirus
The Environmental Protection Agency (EPA) on Friday announced that the cleanup of hazardous waste sites and other pollution spills may be slowed or paused during the coronavirus outbreak.

Cooke Aquaculture applies to modify permits for steelhead farming in Puget Sound
Cooke Aquaculture wants to use its fish farming pens off the southern coast of Bainbridge Island to raise rainbow trout.

Expanding Canada’s Biggest Port Will Be a Blow to Wildlife
The long-awaited federal assessment of the contentious Terminal 2 expansion of the Roberts Bank shipping terminal, 30 kilometers south of Vancouver, British Columbia, is finally ready, and it cites a daunting list of problems, including the potential for serious harm to the region’s killer whales and salmon.

Posted by Salish Sea Communications at 11:02 AM No comments:

Aloha ASPCA Friday!
The American Society For the Prevention of Cruelty to Animals (ASPCA), the first animal welfare organization of its kind in the Western Hemisphere, was created on April 10, 1866. It works with shelters and humane societies across the country, with the mission of preventing cruelty to animals. Its founder, Henry Bergh, was inspired to create the organization after seeing a carthorse being beaten by its drivers. The organization, which has its headquarters in New York City, became the model for many other humane organizations across the country.


Overflowing Oil Tanks Have Traders Eyeing Rail Cars for Storage
Oil companies are turning to rail cars to stash the crude they can’t sell, as the world runs out of places to store a growing glut of cheap barrels. North American producers, refiners and traders are now looking to store excess oil in rail yards in Texas.

'A remarkable thing': Salmon fry born from sperm frozen 20 years ago set to be released
A new generation of salmon is entering the world amid a global pandemic. Salmon fry, whose origin story begins 20 years ago, are being cared for by biologists in Prince George, B.C.

Oil Companies Are Collapsing Due to Coronavirus, but Wind and Solar Energy Keep Growing
A few years ago, the kind of double-digit drop in oil and gas prices the world is experiencing now because of the coronavirus pandemic might have increased the use of fossil fuels and hurt renewable energy sources like wind and solar farms.

Natural Gas Glut Moves Offshore
Liquefied natural gas traders are following the latest trend in the oil market by storing huge amounts of the commodity on tankers, hoping prices will rise before the ship docks.

An Unexpected Coronavirus Casualty: Plastic Reduction Efforts
In a matter of days, hard-won bans to reduce the use of plastics — and particularly plastic shopping sacks — across the U.S. have come under fire amid worries about the virus clinging to reusable bags, cups and straws.

COVID-19: Reduced Metro Vancouver air pollution key to a flatter curve
Vehicle traffic is down 47 per cent within Vancouver’s city limits and down 55 per cent in the downtown core since non-essential businesses were shut down to control the spread of COVID-19

Posted by Salish Sea Communications at 11:20 AM No comments:

Aloha National Rainbow Friday!
Rainbows are caused by the reflection, refraction, and dispersion of light in water, resulting in a visual spectrum of light appearing in the sky, taking the form of a multicolored arc. They always appear on the side of the sky directly opposite to the sun. Don’t go chasing rainbows, because they’re not necessarily located at a specific distance from where you observe them. They’re an optical illusion viewed from a certain angle to a relative light source, meaning the closer you try to get, the further away it goes. Even if you see someone who appears to be standing right beneath the rainbow, they’ll see a different rainbow further off into the distance. In the words of Kermit the Frog, “Rainbows are visions, they’re only illusions, and rainbows have nothing to hide.” (National Today)


E.P.A., Citing Coronavirus, Drastically Relaxes Rules for Polluters
The Environmental Protection Agency on Thursday announced a sweeping relaxation of environmental rules in response to the coronavirus pandemic, allowing power plants, factories and other facilities to determine for themselves if they are able to meet legal requirements on reporting air and water pollution.

Coronavirus closures reduce Seattle-area air pollution, but not global warming
Seattle-area air quality is a bit better as the novel coronavirus shuts down economic activity and travel. Levels of nitrous oxide (NOX), a pollutant produced by tailpipe emissions and other sources, are being detected at generally lower values in local air-monitoring devices.

Coronavirus forces postponement of COP26 meeting in Glasgow
A key climate summit in Glasgow will be delayed until next year due to disruption caused by the coronavirus.


Life in the time of COVID-19: community voices
Salish Current readers and writers share their stories about how the COVID-19 virus is affecting them in this time of the evolving “new normal.”

Lawsuit filed to protect wolverines
The fight continues to protect an elusive animal found in the North Cascades and other mountain regions of the western United States as several nonprofits have filed a lawsuit against the federal agencies responsible for administering the Endangered Species Act.

Plastic Wars: Three Takeaways From The Fight Over The Future Of Plastic
For decades, Americans have been sorting their trash believing that most plastic could be recycled. But the truth is the vast majority of all plastic produced can’t be or won’t be recycled. In 40 years, less than 10 percent of plastic has ever been recycled.

Posted by Salish Sea Communications at 10:47 AM No comments: