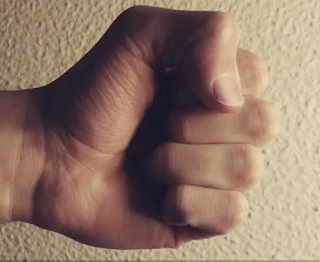 Jan-ken-po Day
Rock paper scissors is usually played by two people, often when something needs to be chosen, such as whose turn is next. Hands are made into the shape of a rock, piece of paper, or scissors. Rock breaks scissors, paper covers rock, and scissors cuts paper. A similar game was first mentioned in Wuzazu, a book by Xie Zhaozhi, a Chinese writer of the Ming dynasty. Known as shousiling, the game was said to date back to the Han dynasty which ranged from 206 BCE to 220 CE. Hand signal games traveled from China to Japan in the seventeenth century, where they became known as sansukumi-ken, and rose in popularity. "Ken" meant fist games, "san" meant three-way, and "sukami" meant deadlock. There were variations of the games, the earliest being mushi-ken. The first form of the game to use symbols for rock, paper, and scissors was jan-ken. Created in the late nineteenth century, the modern version of the game is derived from it.

‘It’s pretty dire’: Vancouver Island salmon under threat from climate change-induced droughts
As the island enters the most severe level of drought in the province, experts warn B.C. has much work to do to manage for watershed health in the midst of prolonged dry spells.

Taking the temperature of salmon
Warming waters threaten the recovery of salmon in Puget Sound. New findings about stream temperature could help salmon survive the threats of climate change.

After mystery sea star die-off, could captive breeding rebalance California’s underwater forests?
Without sea stars, an explosion of sea urchins knocked the ecosystem off balance. Now scientists are racing to breed a new generation of their predators.

B.C.’s extreme heat is here to stay. Critics say government’s plan to deal with it is dangerously weak
From 570 devastating heat-induced deaths, to fish die-offs, to berries being baked on the stem, British Columbians are experiencing the multitude impacts of a growing climate emergency that the province urgently needs to adapt to.

Expert says B.C. sea stars melting away because of wasting disease
A new study published by the Royal Society said sea stars are getting close to extinction as waters along the west coast.

Fairy Creek is set to become the largest act of civil disobedience in Canada’s history
Amid escalating tensions with the RCMP, old-growth logging blockades on Vancouver Island show no signs of letting up. B.C.’s response, experts say, will determine the legacy of the new war in the woods.

An Amazon Rainforest of the sea fights for survival beneath Puget Sound
An undersea expedition to a mysterious world beneath the waves has come to West Seattle's Lincoln Park. It's just one stop on a week-long mission to help understand and save one of our area's most important natural resources, its kelp forests.

Discovery of tire-related chemical that kills coho salmon sparks widespread response
Scientists, legislators and manufacturers are responding in various ways to the recent groundbreaking discovery of a deadly chemical derived from automobile tires, a chemical that can rapidly kill coho salmon swimming in urban streams.

Posted by Salish Sea Communications at 7:57 AM