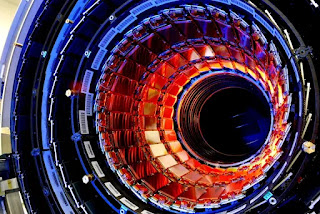 Aloha Large Hadron Collider Friday!
The world’s largest particle collider, the Large Hadron Collider (LHC) was built by the European Organization for Nuclear Research (CERN) and first went live on this date in 2008. It is an 18-mile (27km) long experimental machine which passes through the French-Swiss border. The Collider was constructed to find the Higgs Boson particle, an elementary particle in physics.

Plugged in to the Salish Current?
Kids, the cohorts with the lowest vaccination rates, go back to the classroom. Read the story, "Pack a lunch, don a mask: kids go back to school in person as COVID-19 persists," this week's offering in Salish Current.  It's open-access, ad-free, independent, fact-based, nonpartisan, not-for-profit, reader-supported journalism serving the Whatcom, San Juan and Skagit community. Give it a try with a free subscription to our weekly newsletter: mikesato772@gmail.com

Sea cucumber die-off near Vancouver Island prompts fears of wasting disease that nearly wiped out sea stars
When Kathleen Reed descended for her usual weekly dive off the coast of Nanaimo, B.C., last Saturday she was shocked by how many dead sea cucumbers she saw. Reed has completed more than 500 dives and says she'd never seen so many of the deep red echinoderms turned pale, limp and slimy.

In North Cascades, researchers, climbers watch Washington’s snowpack quickly melt, exposing glaciers’ retreat
Washington has the most glaciers of any state in the Lower 48. These frozen reservoirs of freshwater keep alpine streams flowing through summer, cool the rivers for salmon making their seasonal spawning journeys and provide humans drinking water and hydropower.

Baby J pod orca ailing; whale-watch tours ordered to keep away
Baby orca J56 is ailing and the Washington Department of Fish and Wildlife has issued an emergency rule ordering commercial whale-watch tours to stay farther away to help her survive.

Marine Protected Area network off B.C. Coast could provide a template: West Coast Environmental Law
The federal government’s plan to conduct public consultations for a Marine Protected Area network off the coast of British Columbia could provide a template for how to manage oceans in the face of climate and ecological uncertainty.

From 4% to 45%: Biden Releases an Ambitious Plan for Solar Energy
The Biden administration on Wednesday released a plan to produce almost half of the nation’s electricity from the sun by 2050 as part of its effort to combat climate change.

With plenty of seals to eat, Bigg's orcas flooding Salish Sea; no longer regarded as 'transient'
The Orca Behaviour ­Institute based in Friday Harbor, ­Washington, says the Bigg’s orcas are in the Salish Sea in record numbers this year.

Swinomish threaten to sue over salmon habitat
The Swinomish Indian Tribal Community sent the Army Corps of Engineers on Thursday a 60-day notice of intent to sue over what it says is the corps’ failure to uphold the federal Endangered Species Act, according to a news release from the tribe.


These news clips are a selection of weekday clips collected in Salish Sea News and Weather which is compiled as a community service by Mike Sato. To subscribe at no cost to the weekday news clips, send your name and email to mikesato772 at gmail.com. Your email information is never shared and you can unsubscribe at any time.

Posted by Salish Sea Communications at 6:59 AM