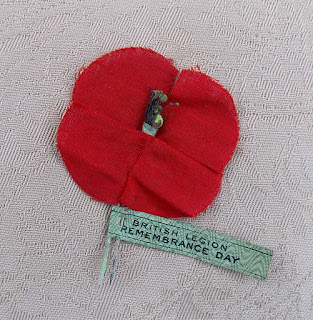 Aloha Remembrance Poppy Friday
The remembrance poppy is an artificial flower that has been used since 1921 to commemorate military personnel who have died in war, and represents a common or field poppy, Papaver rhoeas. The remembrance poppy was inspired by the World War I poem "In Flanders Fields", and promoted by Moina Michael and the “Originator of the Poppy Day” Madame Guérin. Prior to this, Madame Guérin had been raising funds for French and American war charities throughout World War I for widows, orphans, veterans, the Red Cross, the charitable organisation Food for France, U.S. Liberty bonds and other causes. (Wikipedia)

More than 11,000 scientists from around the world declare a ‘climate emergency’
A new report by 11,258 scientists in 153 countries from a broad range of disciplines warns that the planet “clearly and unequivocally faces a climate emergency,” and provides six broad policy goals that must be met to address it.

New drone, underwater footage of orcas stuns researchers, gives intimate look at killer whales' family life
Who knew orcas were so playful, so full of affection, so constantly touching one another? New footage taken by drone as well as underwater stunned researchers who spent two days with the southern resident orca J pod off the British Columbia coast, including with the newest baby, and more time with northern resident killer whales in B.C.’s Johnstone Strait.

This Bellingham waterfront proposal could help save the orca population
In an attempt to bring salmon numbers back to 1985 levels, ultimately helping the local orca population, plans are in the works to bring a large fish hatchery to Bellingham’s waterfront.

Feds agree to more environmental scrutiny of sea walls, bulkheads on Puget Sound shoreline
The U.S. Army Corps of Engineers will give more scrutiny to sea walls, bulkheads or other armoring of the Puget Sound shoreline under a court-approved plan to resolve a lawsuit. Scientists have found that such shoreline development, though it may ease erosion, can cause serious damage to areas that are vital to some marine life, such as spawning forage fish, at the base of the Puget Sound food chain.

Cypress Island eyed as potential site for whale sanctuary
An international nonprofit with the goal of establishing the first whale sanctuary in the world is eyeing a location in Skagit County.

Posted by Salish Sea Communications at 11:33 AM