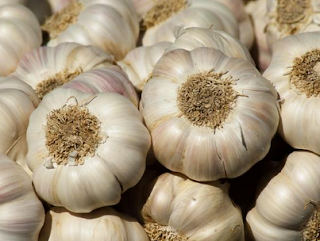 Aloha National Garlic Friday!
Garlic is a species in the onion genus, Allium. Its close relatives include the onion, shallot, leek, chive, and Chinese onion. Garlic is native to Central Asia and northeastern Iran, and has long been a common seasoning worldwide, with a history of several thousand years of human consumption and use. (Wikipedia)


It’s not just pipelines: Sea ports could see marine traffic reviews after Ottawa’s directive on $2B Vancouver terminal
In an echo of the criticisms that stalled the Trans Mountain pipeline expansion, opponents of a $2-billion container terminal near Vancouver are calling on the federal government to delay hearings on the project, arguing regulators have failed to account for the environmental effects of increased tanker traffic that would result from the development. Jesse Snyder reports. (Vancouver Sun)

Hey, seals and sea lions! Quit eating so much endangered orca food... or else.
"This is that classic mix of the predators being a protected species and the prey being a protected species," said Nate Pamplin, policy director for the Washington Department of Fish and Wildlife. "We don't know the level of consumption in terms of whether or not humans should intervene." Tom Banse reports. (NW News Network)

Posted by Salish Sea Communications at 9:52 AM